The History of the Parish 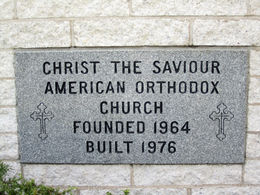 The beginning of Christ the Saviour Carpatho-Russian Orthodox Church began on March 6, 1964, when the late +Bishop Peter Shymansky, acting as Auxiliary, and with the blessings of +Metropolitan Orestes Chornock, the first hierarch of our diocese appointed the late +Father Stephen Jula to establish a missionary church in the Cleveland, Ohio area.  With great excitement, the first organizational meeting took place on April 9, 1964 with 65 people joining the newly formed parish.  The following week, the parish voted to purchase the First Baptist Church located in Parma, Ohio.  While the church was being prepared for worship, services were held in the facilities of a local bank branch beginning on Palm Sunday of 1964.

​The purchase agreement for the new Church was signed on May 6, 1964; however, it wasn’t until Pentecost Sunday (Father’s Day) on June 10, 1964 that the first Divine Liturgy was celebrated at the Church in Parma.  It was indeed a joyous day for the congregation as it was the “Birthday” of the Orthodox Christian Church and the first day of worship in the first permanent Church.  By November 15, 1964, when +Metropolitan Orestes came with ten priests to bless the new church it was already adorned through the sacrifices of the small community with an iconostas, carillon, and all the necessary liturgical items.  From 1964 to 1974 the old wooden building at the Parma location remained home to Christ the Saviour congregation.  Always working for the greater glory of God, the men and women of the parish made enough money from the sales of perogies and fish frys at the first Church to make the construction of a new church building a reality.

The planning stages began in 1973, but it wasn’t until 1976 that a new church building was erected at Ten Thousand State Road and the cornerstone was blessed by the late +Bishop John Martin.  Christ the Saviour Orthodox Church and St. Paul’s Greek Orthodox Church enjoyed a special relationship which began in 1973.  For over two years, during the period after the Parma church building was sold and before the new temple was built, St. Paul’s on Wallings Road, North Royalton was home to Christ the Saviour congregation.  The two parishes enjoyed joint programs and cooperation for many years while still having separate worship services.

The main source of fundraising from 1977 until 1987 came from an annual festival, which firmly established the Church in the North Royalton community.  In 1985, +Father Stephen Jula suffered a tragic accident and in November of 1987 he formally retired from the priesthood.

In the late 1980’s a committee researched and developed a Bingo program to generate funds for projects that needed to be completed at the church.  The Bingo program still generates much of the church’s income today.  Through the sacrifice of the congregation, a carved gold-leafed iconostas with 30 hand-painted icons, a new carved altar, preparation and sacrament tables were in place by October of 1988.

A Silver Jubilee celebration was held in 1989 to mark the 25th anniversary of the Founding of Christ the Saviour American Orthodox Church, North Royalton, Ohio.  After nearly 20 years, on March 3, 1995 the onion dome with bell tower was erected and the Church was finally completed.  On July 23, 1995 the completed church, cupola and bell tower was blessed by the late +Metropolitan Nicholas Smisko.

The Church’s onion dome was blown off by Super-storm Sandy on October 30, 2012, the bell tower damage was repaired and a new dome re-installed the summer of 2013.

A Golden Jubilee celebration was held on August 23, 2014 to mark the 50th anniversary of the Founding of Christ the Saviour American Orthodox Church, North Royalton, Ohio.  Regretfully, our founding pastor, Father +Stephen Jula passed away a mere ten days earlier and was unable to attend the celebration.
Powered by